So I’ve been without my main pc at home the last week. I’ve had a series of issues with it over the last year.

First I had a devastating data loss when my Adaptec 5805 Raid card decided to screw up my “eggs in 1 basket” massive 2.7TB Raid 5 array. I lost a lot of data from that one and I’m still smarting. I learnt alot about managing large amounts of data though. A post for another day. 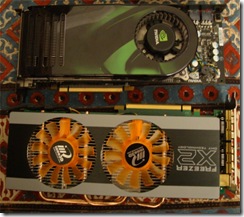 Then more recently my graphics card went squirly. All crazy bright pink and green lines everywhere. I’ve seen this before I thought - either my 8800GTX just dropped a tab or it’s gone boom. So I got a cheap upgrade - an Inno3d 260 GTX. Stuck it in and all is good. See my old NVidia 8800GTX 1GB card and my new 260 GTX on the left there.

Until my BIOS decides it hates me and stops letting me boot up.

The BIOS itself gives some squiggles on screen then defaults to the damn RealTek Network Boot Agent. This is BIOS small talk for “I can’t find anything bootable so I’m gonna try the least likely shot at getting something to boot.” It also gives the famous “CMOS Checksum Error” which sometimes means your battery is dead. Nope - I change the battery, I reset my CMOS. Nothing. I can’t flash my BIOS because I can’t get anything, even a floppy to boot. I s’pose I could try and get a new BIOS chip but I’m figuring now - this is a dead board. 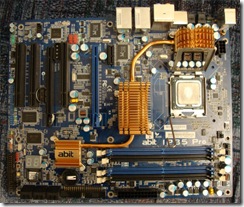 It is an Abit IP35 Pro. It was a fantastic board and I wept when Abit became no more. I wept a little when I realised I’m gonna have to say goodbye to my IP35. I wept even more when I realised I don’t have enough cash to upgrade to an i7 (socket LGA 1366) DDR3 compatible board, because then I’d have to upgrade my RAM and CPU as well. So I’m gonna have to buy another P45 board and not upgrade anything else.

So I’ve ordered the Asus P5Q Pro Turbo. I’m ok with that. I’m running the MicroATX P5QVM on my living room media PC and it’s quite nice. The Pro Turbo has an ICH10R chip as the southbridge for on board RAID, which I like to have the option of using. It has onboard 7:1 sound which is good because I have a history of breaking my Audigy cards and I like a backup. It has up to 8 SATA ports, 5 of which through the ICH10R and are nicely situated to plug from the top instead of the side which I hate. The P45 Benchmarks well - it can suck all the speed I need out of my E6850 and DDR2 800 RAM with a little bit of overclocking. Anything else would be overkill. 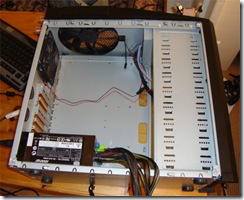 It’s all housed in an Antec 900 Case. I love this case. I used to use a Coolermaster Cosmos. Very roomy case – with some nice features but in the end I hated it. Mostly because a) it had zero cooling going to the Hard disks and b) it wasted space. The Antec 900 is just the right size and everything can be cooled. Fans everywhere! I have hacked around in this case for 2 years. It has bumps and bruises, but it still does the job magnificently.

Here’s the final spec (some more piccys of these below):

The chip is still sitting nervously in the motherboard awaiting it’s transfer! 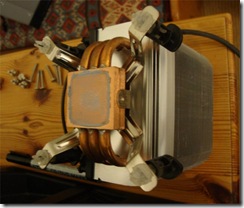 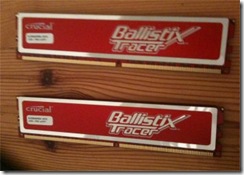 It’s coming today - I’ll take a few more pictures of the rebuild. Wish me luck in not bending a pin on my CPU chip during the transfer! My dream upgrades for this rig at the moment?